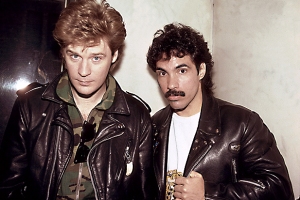 The kids in leather, and launched.

We missed Hall & Oates the first time around, but 40 years later they paid us back with a superb performance in Toronto in June.

Years ago, the music of this creative duo crept into our consciousness with Blue Room’s rendition of “Every Time You Go Away” in Planes, Trains and Automobiles.

Little did I fathom at the time that he had covered this wistful piece from one of the truly great composing partnerships of the 70s and 80s. 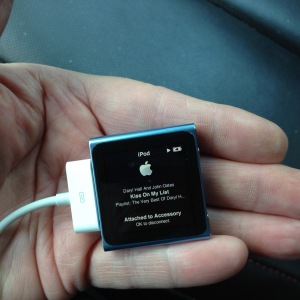 Still unaware of Hall & Oates, I next captured “One On One” on my Apple Nano about 4 years ago.

Buying the Nano was an awakening long overdue.  I was looking for a storage device to hold some music that I was collecting: a couple lost decades of 70s-80s Pop melodies that I had shunned during my Folk and Classic Country years.

One day I was in Best Buy when I asked a helper,

“How many songs can I get on this little Nano?”   It was about the same size as a Saltine cracker, but sturdier.  Its black crystal hinted at deep, magical powers.

Four years later we have 957 cuts on the Nano, which include about twelve from our happiest discovery: Hall & Oates.

That evolved when I was given a publicity CD at a Direct Marketing Association trade show.  ULine, a container company–you know, “boxes”— somehow concluded that a free CD of 15 H&O cuts in a ULine-branded sleeve was a good giveaway item to promote itself to mail order companies. 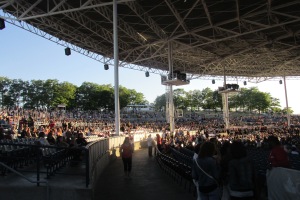 The Molson Amphitheater on a warm evening by the lake.

Not knowing who Hall & Oates were, I stuffed the CD into a drawer and didn’t retrieve it for a year or so.  One day I popped it into a player, and heard the iconic “Out of Touch” composed by John Oates.

My wife perked up when she heard “Kiss On My List”,

With that we rolled through their top hits repertoire, and pinched ourselves several times as we knew these songs, but had never connected the composers. 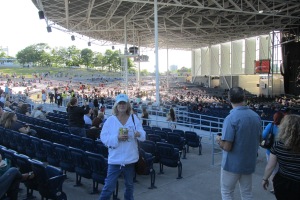 The upshot is twofold.   First, we needed to get to a Hall & Oates concert.  Second, we now recognized ULine as a brand of… boxes.  That learning process took about 5 years, but I hope some advertising manager somewhere is having a small vindicating shiver, a frisson, right now, much to their puzzlement.

—Which brought us to the Molson Amphitheater on the waterfront of Toronto, looking out on Lake Ontario. 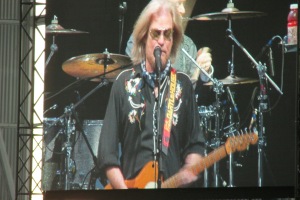 This open air concert venue seats about 5,000 under the roof, and another 1,500 or so up on the lawn.   On a warm summer evening, with a cooling humid breeze coming off the lake, one can’t find a better place to enjoy a live concert.

There are auditoriums and arenas for McCartney, The Stones and Bruno Mars, but you are one of 60,000 fans holding your ears.  Instead, the Molson Amphitheater is the happiest compromise of a concert crowd and intimacy rolled into one.

The ticket prices are good, and there is no more politely enthused and amicable concert fan than a Canadian.   Every performance we have attended at the Amphitheater evokes a heartfelt thank you from the performers about how welcome, and safe, they feel in Toronto.

Wow!  It must be pretty tough everywhere else. 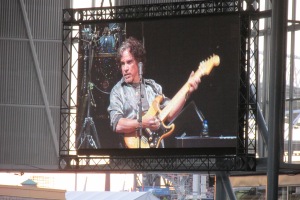 Oates is the Yin in this timeless duo.

Our mental image of Hall & Oates is locked in the 70s.  A couple young guys, with hair and rugged good looks.  Up close today, on the jumbotron, it’s 40 years later.  But the genes still hold their ground.

Even better, so does their music.

Predictably, they opened with Maneater, a solid up tempo number that had the audience on its feet in an instant.  What followed was a succession of hits from the 70s: Sarah Smile, She’s Gone, It’s A Laugh, Kiss On My List. 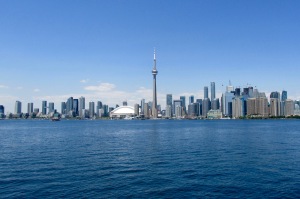 A friendly Toronto on Lake Ontario

Somewhere half way through their performance Daryl Hall hung up his guitar and went to the keyboard, which was a delight.  The camera focused on his hands pounding these hypnotic chords for 8, 12, 16 bars, typical of their best songs where the lyrics open only after the background music is solidly in place.

Hall’s voice has great range.  It’s remarkably soulful up on the high notes, and he is completely unchained in front of 5,000 fans, delivering melody and passion.  Meanwhile, he works the keyboard with complex chords, lots of 8-fingered flats and sharps, in minor and major…a true believer of “black keys matter”. 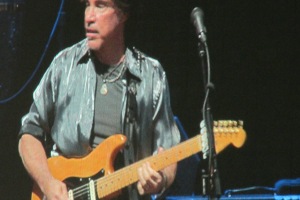 Their music is complex, melodic, and memorable.

John Oates is the journeyman guitarist.  He switches between several during the night, and works up and down the neck effortlessly.   Strutting across the stage he occasionally sides up to Hall, which is the only time you see the physical Yin/Yang of these two: Oates the significant counterbalance to the tall and blonde Hall.

There is a third component to the Hall & Oates sound and that is the roving saxophone of Charles DeChant.  This ponytailed magician nuances every tune with mellow contemplation.   His signature delivery is an extended solo in “I Can’t Go For That, No Can Do” which really stretches the boundaries of contemplation to hard core introspection.  Too long for my taste, but for many, right on. 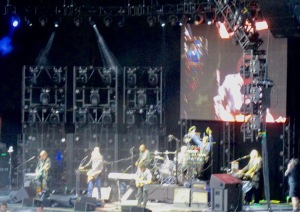 The group returns for two ovations. We can’t get enough.

The team comes out for two ovations, after prolonged applause.  They close with Private Eyes and then back again with Rich Girl, which by then has the audience screaming for more.

But no more, they bid good night.

The genius of this pair is their melodic creativity.   It is complex music: hard to dance to I think, but easily remembered, expansive tunes that you can hum  long after the hall goes silent.

Indeed, the tunes play over and over, inside my head.  After walking 9 holes of golf I have re-sung Private Eyes a hundred times without thinking.

Unfortunately, I can also wake up at 3am, and still have the soundtrack bouncing along, varied, hypnotic, and without cease.

Thanks for reading!   If you are an H&O fan, you will find their tour dates here.

4 thoughts on “Hall, Oates, And A Soundtrack That Won’t Quit”