The President gave his best shot at explaining the complexities of building a website yesterday, and I was able to accept nearly everything he said, except for: “The Federal Government is not very good at buying I.T. services.”  Sitting at my Commodore, I nearly dropped the joystick.   In fact the Feds are very, very good at buying I.T. services.   While starting out with a miserly budget of  $60MM, they were able to expand the Healthcare website development to $200MM without blinking.

But there is something much more intriguing that happened at the President’s press conference yesterday.   For the first 15 minutes, there was the unmistakeable clatter of a typewriter in the background. 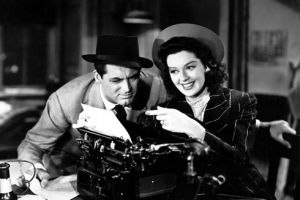 Could it be the true “systemic” problem that the President was alluding to?   Do you think it was press-sec Jay Carney typing out name badges?   Or perhaps the prompter was down?   Or maybe Bob Schiefer was hammering out a Tweet in time for the afternoon mail pick-up?

Which brings up another phenomenon of the TV screen today.   Is there a news show today that is not yet displaying Tweets while attempting to deliver a news story?   It seems that Twitter-on-the-News is really like target practice at the arcade.   A quiet heckling that the speaker can’t see, but persists in 140-character blasts across the bottom of the screen.

Well, not quite at the bottom of the screen.    Actually, the TV viewer today is lucky to see anything at all on a conventional TV monitor.   When the Tweets aren’t pinging below the speaker podium, the broadcast network is busy branding the presentation with a banner headline and of course, their logo on the bottom one-third of the display. 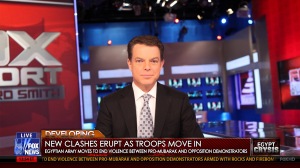 This may really benefit unprepared reporters who otherwise would need to wear pants with their suit jacket and tie.  It is also a lifesaver for those celebrity chefs who are talking about their preparation of waffles flambé, but madly scrambling to extinguish the blaze on the stove.   The network message covers it all up.

Except for the crawlers.   While the news takes us to a rained-out chicken rodeo roast in the southwest, we can ignore that while reading a continuous stream of other news, curtly written and dragged across the very bottom of the screen.   This is the crawler.  Aptly named, it’s a reminder like a leaky faucet that, despite the whopper that is being unfolded up above, there’s a lot of other stuff we should catch up on. 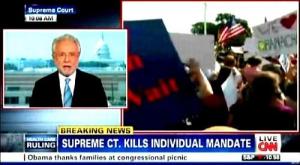 But back to the typewriter.   In last week’s October-November AARP magazine (my mother’s) I noted this newsworthy finding on page 14:   a typewriter repairman can earn up to $50,000 per year.    Apparently there is a market-worthy segment of writers and literati out there who use typewriters, and when the keys jam, you need a professional.   Keeping this all in mind, I would gently advise those repair professionals to hang around the White House press room.