“You have to write letters to get them,” said my 5th grade teacher as she drilled us on formatting.    What a drag.    At the uncomfortable age of 10 we had no one to write, let alone anything to say.

So it’s ironic that over half a century later I exit from a successful business which is all about writing good letters.

In direct mail, the letter is the backbone of building a personal relationship.  Avid consumers are enchanted by letters from their favorite gardener, doctor, hunter, dress maker, shopper, financier, teacher, traveller and coin buff  frothing over the latest gadget, find, or technique.

It’s no wonder direct mail grew astronomically through the back half of last century and into this one.    We were guaranteed to receive a letter at least once or twice a week with important news from somebody we knew, and who knew us, from far away, like Terre Haute, Fort Wayne, Franklin Center, Troy, West Babylon or Battle Creek.

But the bloom pales, if it doesn’t fall right off the rose if we discover that the writer doesn’t exist.    I was stunned when I learned that Readers Digest’s Carolyn Davis was just a beautification project — a makeover from “CD” for the Credit Department.

Carolyn was just my first commercial heartbreak.    I only recently learned that Betty Crocker, the lady who guided my mother through countless birthday cakes and blueberry muffins is a complete phony.   Never existed.    Isn’t even an anagram for an NSA operative named Cory Berckett… clandestinely stealing philo recipes while posing as a dishwasher.

The charade continues.   Martha Logan, who managed the Swift meat kitchen for a generation never existed, though at least she was a pen name for the real Beth Bailey McLean.

Ms. McLean was born in Superior Wisconsin in 1892 and knew her bacon.   But Swift’s ad agency apparently wasn’t satisfied with her creds.  They invented their own version of Martha Logan to broadcast from the Swift radio studios on Chicago’s WLS. 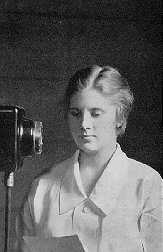 This new Martha had a photo portrait, and was reared and educated in Illinois, homeland of a long tradition of phonies.

She was the majordomo for Beatrice Foods, formerly the Beatrice Creamery Company, founded in 1894 in no, don’t say it, Beatrice, Nebraska.  That’s right, there never was a whiff of a Beatrice in that company unless she was lactating in a stable outside.   Adding the final insult, Beatrice moved to Iowa in 1905.

Which brings me to a quandary today.   On impulse, I made a donation to Wikipedia.   Totally guilt-ridden, I felt better after giving them a measly $10.    In response, I received a Thank You letter from Sue Gardner, executive director of Wikimedia Foundation.

Well, this wasn’t a Thank You letter.   It was a THANK YOU letter.  555 words, 14 paragraphs, 49 lines and 3337 keystrokes.   I winced in embarrassment.   Imagine dropping a few pennies into the Salvation Army bucket, and the bell ringer chases you down the crowded street crying thanks, before tackling you around the knees and blubbering all over your $900 cashmere wool coat.

Ms. Gardner saw my paltry $10 funding the sum total of all world knowledge sought by countless individuals, and she began to describe the dire circumstances of each of them.

She concluded: “On behalf of the Wikimedia Foundation and the half-a-billion other Wikipedia readers around the world: thank you.”

Truly though, her letter did its job.   I have to return to Wikipedia, and I will no doubt double down on my charity.

But now I wonder– is she really there?