We have a fleet of canoes.  It was never planned that way, but nevertheless, fate, good fortune and the wish of one man made us canoe mavens. 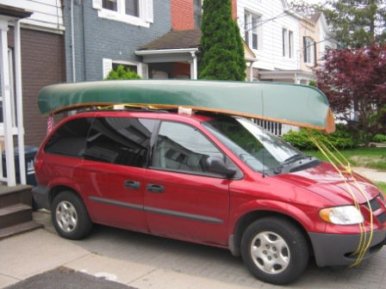 A typical sight along the summer roads of Ontario.

Just last week our son rescued one from the shaky rafters of a rustic, ancient boathouse on a lake in eastern Ontario.

The craft in question is a Chestnut brand Prospector with v-stern. It is a super-wide 16 feet feet long, and has a transom that could host a 3hp outboard if required. 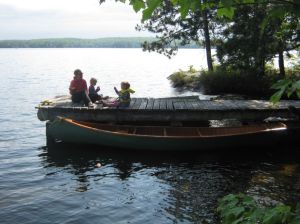 The Chestnut Prospector known as “Pickle” by our grandchildren.

Our grandchildren call it the Pickle, because it’s green. The Pickle is the last of three canoes which my late father-in-law bestowed upon his three daughters, fulfilling a wish that spanned over half a century.

Chestnut Canoes were an iconic boat company headquartered in Fredericton, New Brunswick.  It went under in 1979, victim of changing tastes. 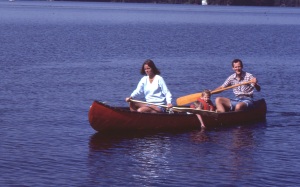 1983– Mabel’s Tremblay loaded down with our young family.

The class of canoe is cedar-canvas. That is, a cedar rib and plank hull, over which canvas is stretched and bound into place. You will find modern canoes made out of fiber glass, and the truly exotic craft are made from pure cedar strip.  Last summer we lifted a carbon-fiber canoe with two fingers.   It weighed 14 pounds.

In the heyday of cedar-canvas canoes, it was common that most cottages in eastern Canada had a canoe, or were in sight of one off their front dock.

Camp was our training ground, and today it commissions at least one war canoe, seen above in their brochure.

Truly a Canadian legacy, the canoe today is still seen on the tops of vacationers’ cars speeding along the highways all summer long. But more often, you will see kayaks.  Hard fiberglass, ultra light, in hues of red and yellow.

When not on the road, or in the water, canoes are habitually found in the rafters of boathouses and garages, nation-wide. Which is where we have two, right now. 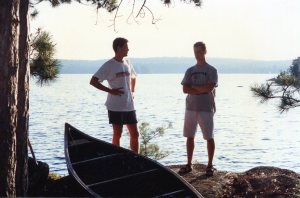 1996–Our boys ponder a launch of our Pal Chestnut off the front point of the cottage.

Tom Hamilton is my wife’s Dad, and from the time of his youth he had been an outdoorsman. Very much into camping and fishing, Tom enjoyed no greater release than to glide among the ripples of a quiet northern lake, trolling a lure in search of a hit from a bass or muskie. If he couldn’t experience that first hand, he was intent on passing the thrill along to his daughters.

So they went to camp. 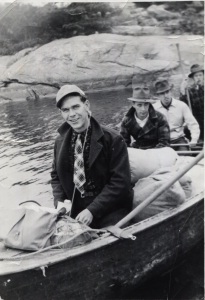 1950– Tom took his team to camp to build cabins. Here they are arriving in “Tough”, a war canoe.

The YMCA summer camp of our youth was built by service groups, in one of which Tom was a member. After WWII, he spent springs and summers cobbling together cabins, docks and dining hall for generations to enjoy.

The waterfront was well stocked with Chestnut canoes, donated by wealthy benefactors.

The skills regimen at our camp focused on canoeing and out-tripping. The requisites were quite firm for campers to canoe and out-trip. 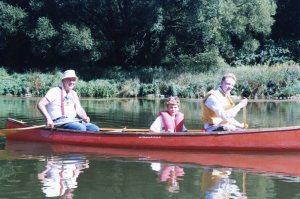 1989– Tom with his grandson and friend paddling the Grand River in his Pal, “Hochelaga”. 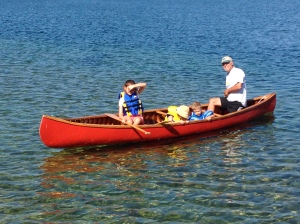 We graduated from Tenderfoot to Tribesman, Brave, Chieftain, and Chieftain Expert. A fully-fledged canoeist was eligible for out-tripping when they had mastered bow, stern, portage and solo.

The strength test was to hoist a canoe onto one’s shoulders, unassisted, and portage it about a quarter mile. The canoe weighed around 80 pounds, which doesn’t sound like much until you are swinging it over your head in one move.  The ultimate test was to paddle a “Figure 8” without changing sides. 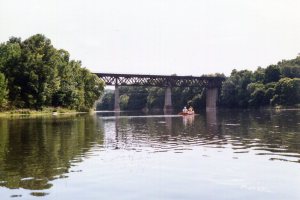 The beauty of river canoeing is to enjoy sights unseen from the highway. Grand River, Ontario.

This was the environment Tom treasured, we were raised in, and not surprisingly, it generated tremendous self confidence and pride. The dividend was paddling these sleek, quiet craft on waters through valleys of forest and granite, easily gliding up to wildlife unaware at any bend in the shoreline.

Among Tom’s three daughters, we have 5 cedar-canvas canoes. 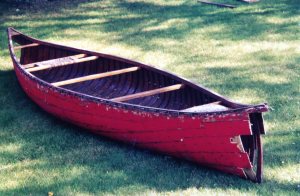 2001–Mabel’s Tremblay under total rebuild. The red paint bled through an earlier canvas.

When he retired in 1985, Tom searched classified ads, read marina bulletin boards, and probably pestered a few motorists who were transporting a canoe, and eventually acquired three beauties.

They are all in Ontario. Mary’s Chestnut (a Pal model) canoe resides in a bay by her cottage on the Bruce Peninsula.   Bonney’s Langford is beside the Mississippi River in Pakenham, and Jane’s Prospector “Pickle” is just returning from a week on Silent Lake.

Many years before Tom hatched his acquisition plans, I had a well-travelled canoe given to me by a veteran cottager on our lake. Her name was Mabel Stearns. Her canoe was made in eastern Canada, around 1951.   I think it is a Tremblay. 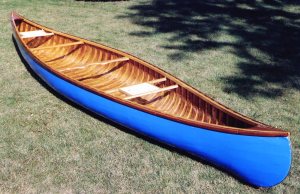 It looked pretty rough. Coated in layers of chunky blue and green paint, it had dirty brown, peeling varnish coating its ribs and gunwales, and a hole in its bow, attributed to a fast speeding bullet.

Like most older canoes that live outdoors, its decks were crumbling and rotted from years of storage on the ground. 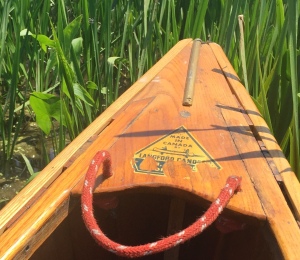 Bonney’s Langford among the rushes in Pakenham, Ontario.

We were nevertheless thrilled to have the canoe, and that fall we put on a new canvas, reinforced the bow and stern stems, and painted it red. Not a professional job, but sufficient for the time being.

A couple years after that, in 1981, Tom found a red Chestnut Pal looking for a new owner, and convinced me to buy it from a childhood friend of his for $100.  For me, that was considerable, but at the time, a Pal retailed for $800 or more. This canoe was also broken, and I forthwith re-canvassed it, and painted it yellow.

The reconditioned canoes went to our cottage and traded places a couple of times when a more serious attempt was made to give them a worthy overhaul. 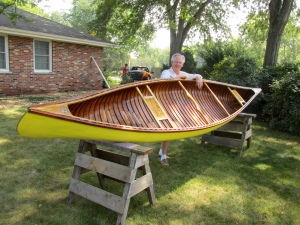 2015– My $100 Pal after a major overhaul, complete with mahogany gunwales.

Ultimately, we sold our cottage, which is a not uncommon phenomenon in Ontario where tax law makes inheritance of family cottages a costly consideration.

While we enjoyed the convenience of the cottage’s stable location, we now appreciate the canoe for its portability to other lakes and rivers. 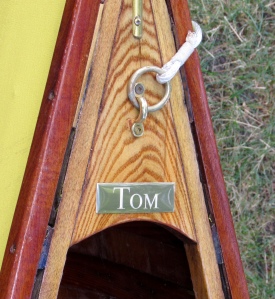 As a result, the Pickle has visited Silent Lake and awaits its next trip, now likely next year.  Mean time it rests dry in storage outside Toronto.

And our $100 Chestnut has been on numerous lakes and rivers before taking up residence behind our house.   Mabel hangs from the garage ceiling, waiting for her next outing.

For me, the pleasure in all of this has been the fulfillment of Tom’s wish, that the canoe stays front and center in our family.

It has done that, and more so.

Thanks for sharing our canoe story!  “Paddles Keen And Bright” is lifted from a Canadian canoeing song, written by Margaret Embers McGee.  The song is sung as a round, a supposed assist for paddlers.

6 thoughts on “Paddles Keen And Bright”