The white pine is the tallest in the woods.

Driving through the country the other day I spied a tall white pine on the edge of a woods, and it reminded me of the pine woods at home, in Delhi, Ontario. We spent many weekends.. in the woods, under the woods, and on top of the woods, building forts, huts, tunnels and abodes.

The pine woods framed the southeast corner of our wanderings around town.  Just south of the CNR tracks, and a few blocks east of Delhi Industries, and Delhi Metal Products, the 10-acre plot was our outdoor workbench as kids.

Soft green needles when on the branch, they fall rusty brown to the forest floor.

As the name implies, the woodlot was predominantly white pine, intermingled with some beech, birch, and the odd maple.  The floor was a soft pad of rust-colored pine needles.  If you dug down 2 or 3 inches you were into soft, black, sandy loam, the product of years and years of quiet decomposition.

White pines are majestic. They are permanently wind-blown like carefree flirts in a park, constantly getting the attention of every eye.  They were frequent subjects of Canada’s Group of Seven painters.

On any given weekend, the odds were good that we were in the woods, digging or climbing.  Our quest was the construction of a hut, or a fort, and occasionally a tree fort.

An adult attempt at reclaiming youth, somewhere on Kauai.

The huts were lean-tos.  We scavenged dead branches for ridgepoles and then layered quantities of pine bows over the structure until it blocked out the sun.  We never knew if it would stop rain, but if it did, it was on a day we preferred to rampage in someone’s basement instead.

Those huts were our headquarters on fair weather days, and absent the real thing, we consumed pine needle and newspaper smokes like little chimneys on fire.

The huts were also big enough to dig pits for small campfires, and if a lost hiker strolled by the lean-to, they were as likely as not to smell the pungent fumes of our home-rolled cigarettes as the smoke curled through the needles of the roof.

On one series of weekends we ventured to build a cave.  This entailed equipment: shovels, smuggled out of the garage avoiding the scrutiny of our parents.  We learned years later that they were oblivious to the whole escapade.  Digging into the soft cool dirt, we dug down a good three feet, piling the proceeds around the sides of the pit.  When the resulting cavity was about 4 feet in height, we laid down the required logs and poles to hold up the roof, which again was a frilly knit of pine bows and other bracken.  Before long, the cave was satisfactorily complete, and smoke ventilated through the canopy to be blown into the woods.

The pine is majestic: a frequent subject for The Group of Seven painters.

This cave was pretty impressive, having shelving inside for a small inventory of consumables like Cokes and smokes, and also a side for a small fire.  We even had it stress-tested when a local teen drove his motorcycle over the roof to prove its strength.  Bikes were lighter then.  Today’s Harley would be stuffed into one of the shelves in an instant.

The first 10 feet were the challenge.

What we did find, and this is precursor of what the hapless Saboga Tribe found in CBS TV series Survivor, Season 7 on Pearl Islands– when it rains, water collects in the pit.  We could have jumped into the future, 2003, and told Rupert, the witless architect that it was a bad plan.  But sometimes, history needs to repeat itself.

Our best, and highest accomplishment remains however, when we built the tree fort.  The tree was an elegant and aging white pine, probably  among the tallest in the woods.  Easily 60 feet high, and climbable to the very top.

The challenge was the first ten feet, over which there were no branches to leg up on.  As a solution, we pilfered various 2x4s and 1x4s and fists full of 4 inch nails to build a ladder up to the branch-climbing level.  When the handholds and steps were in place, we were on our way. 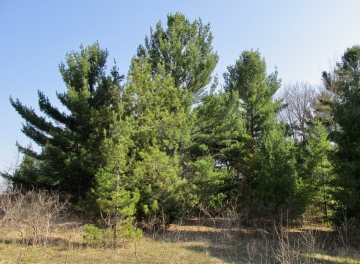 A pine woods, ready for building.

Pine trees are distinguished by their regular frequency of branches.  Every year sprouts a new level, so that we could climb up the tree with relative ease.  As we only weighed about 60-70 pounds, we had the freedom to climb and swing our way to the top, high enough that only another 10 feet of tree was above us.  Standing on broomstick-like branches, hanging onto the trunk, staring into the breeze on a sunny afternoon, the world was ours. 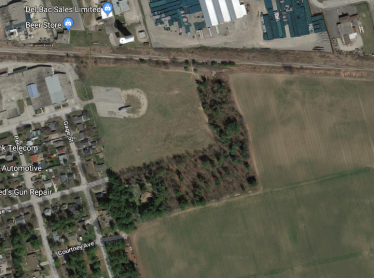 Over to the west we could see the Barrel Restaurant, Wills Motors, Smith Lumber and the factories on the highway.  To the northwest, there was Beselaere’s Fuels, and the German Hall.  Just north of us was the CNR track, and if we timed it right, we could see the locomotives lumbering down the track towards Simcoe.  Beyond was the tobacco exchange and then the high school. To the northeast was the dump, and way off to the east was the fertilizer factory. Twisting around the tree and facing south was a vista of treetops and woods, edging up to a tobacco field, already green with young plants dotting the endless rows.

I think now about the tree as our finest moment.  It invited us to climb, and regardless of our real position, we felt entirely safe and secure, high above the ground, surrounded by a nest of soft green needles on a web of black branches.  There we hoisted up more boards and nails, and made a platform big enough for 2 or 3 kids, happy to be out of sight, but able to see for miles.

Google provides a beautiful view of the pine woods today.  Miraculously, it is still there, somehow protected from development.  I wonder if kids still climb trees, and I wonder, is ours still there?

Thanks for reading!  Please share this with your tree-climbing friends!

8 thoughts on “The Treetops Club”