Flipping through old photo albums is a fearsome task. We used to look better. The forces of gravity and time didn’t seem so obvious.

The post office isn’t immune from these effects either, but it is still eye-opening to see how direct mail has aged with some elegance.

Direct mail dropped 22% in the past ten years, but First Class dropped even more: 37%.

I took a moment to compare 2016 USPS results against 2006. If you are a USPS employee, a printer, or a person who lives by the mailbox, read on.  By the way, I converted these to a normal calendar year.

We all associate the USPS with letter mail: invoices, statements, and personal mail. This past year, the USPS delivered 62 billion First Class letters. Ten years ago– 98 billion letters…a 37% drop in personal mail.

On the other hand, direct mail only dropped 23 billion pieces, or 22%.

But here is where direct marketers have managed to carve out a path to serve some 150 million homes and businesses with advertising every day.

Direct mailers have managed to make a respectable living with the USPS by slimming down. While the rest of the world has acknowledged that our bodies are bigger than in the past, direct mail has successfully dropped a few sizes.

Direct Mail has slimmed down in the past decade.

This may not seem like a big deal, but it reveals a lot about the reading public.  Direct mail designers have essentially cut down on paper and ink.

The landfill protesters and tree huggers have to be thrilled.  But despite their glee, most direct mail is entirely recyclable, and much of it is made from post consumer waste paper anyway. 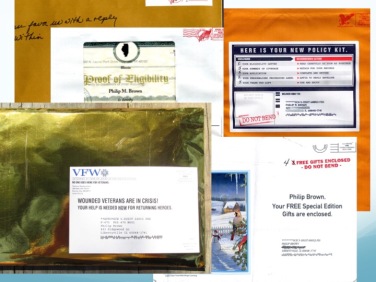 The super-sized Flat, large enough to hold a placemat is fading.

The irony of the slimmed-down direct mail piece is that the USPS charges the same postage for a 1-ounce letter as it does for 3-1/2 ounces.  This would be the same as your favorite airline designing all the seats for a 300-pound row mate.  You know that is not the case, but the USPS is much more generous.

Given that allowance, it would make sense for direct mail designers to plump up their product.  Postage is the highest proportion of the in-mail cost, yet it is not leveraged.  Instead, parsimonious design has cut out the frills and treats that used to adorn productive direct mail.

My trips to the mailbox are disappointing.  It’s all two-dimensional post cards.

New age designers have lost the urge to embellish the kit, forsaking the 3.5 ounce opportunity to “load it up” like these.

What you don’t see anymore are great works of art that pleased and intrigued the reader.

The stuffed envelopes have been flattened.  The labels and stickers are gone.  The samples are gone.  The origami is muted.  Member cards, scrapped.  The shiny foils no longer announce a prize.  The extra letters and testimonials are removed.  The textures are smooth and sterile.  Reply envelopes?  Naah….go to the website.  Brochure?  Website.   Buck slip?  Phifff–what’s a buck slip??

So direct mail has entered its age of demur elegance: slim, sleek and stylistically boring, but somehow pleasing to the agency head who doesn’t absorb sentences longer than a gnat’s breath.

An experienced designer once told me, “you will make more money by adding to a kit than you will by taking away.”  What would he think today?

But let’s give the contemporary designer their kudos.  They have won the war on weight, but they have lost their way on  beauty and bucks.

Thanks for reading!  Please share with your direct mail associates.   Just like people who have rediscovered the beauty of vinyl records, there will be a time when “gangbuster” direct mail will return.

2 thoughts on “USPS: It’s Worth The Weight”