I had to laugh when a recent plea came across our Village Facebook page, “Will they be spraying for mosquitos this year?”

The summer’s nearly over.  Fall’s coming.  Frost on the pumpkin.  Mosquitoes??

Skitters may be annoying, a nuisance, bothersome and carriers of West Nile disease, but other than that, well, they aren’t stink bugs.

Last fall we found scads of these penny-sized twirps on the side of our brick ranch, an unsightly rash of brown measles, sunning themselves every afternoon through September and into October.  Mindful of the laws of karma, I did not kill them.  I flicked them off the sliding door screen and wished them a good life, but somewhere else.

Brown Marmorated Stinkbugs are so named because they have a marbled camouflage suit.  Hard to see as they bask on the lilac leaves in the afternoon sun. 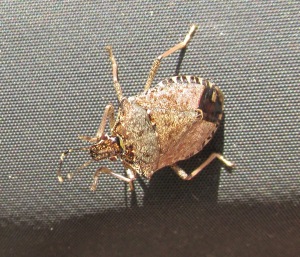 Halyomorpha halys: a member of the family Pentatomidae

They also smell.Before understanding what I was dealing with, I smacked one, and as it exploded under my hand, it shot off a dying waft of odor that resembled rotting, moldy underwear, which I say kindly.  Understandably, they are not tasty, so lack many natural predators.  Crows turn up their noses.  It turns out that wasps will go for them.  Terrific!

Stinkbugs are unpleasant creatures, only recently making it to our corner of the Midwest in northern Illinois. Apparently they originated in the far east, and hopped a ship to a harbor on the east coast, and with time, they have moved west.  Apparently they like soybeans which grow abundantly on a 33-acre field across the highway from us.

Time moved on, and as the snows fell in December, the stinkbug drifted out of our memory.   We passed the evenings in front of the fire, catching up on Survivor and other important social studies.

Then, one day in January, a black dot appeared on the family room wall, over the door.

No longer spooked by the ironies of karmic payback, I grabbed the odiferous brown button in a wad of tissue, and walked it off to the toilet for a quick dispatch to the next world.

“Don’t know where that came from, but it’s history.” I flumphed down on the TV couch beside my wife to witness 8 publicity-hungry people attempting to dive into the Pacific ocean to retrieve a key, which would unlock a box of beanbags back on the beach to throw into a basket which would tip over and raise a victorious tribe buff.

Then, looking up over the fireplace, another brown button.

You can guess the conversation that followed, and that eventually, unbelievably, tortuously repeated itself for the next three months as every day, two more bugs appeared in the family room.

Under duress, their natural odor is intolerable.

Somewhere on the outer lining of our house, a gang of stinkbugs was holed up, waiting for spring.  We came to imagine that the ringleader would crawl among its cohorts asking for volunteers to go out and check the weather.

Everyday, without fail, two creatures would emerge, quietly, stealthily, and present themselves somewhere in the family room or hallway.  They never flew.  They just appeared, immobile, prostrate, stuck to a wall.   They stood out like 8-balls in a bathtub, and so quickly ended up mummified in tissue and expelled to a plumbing system which hopefully took them to a station miles way from us.

And then spring came, and the bugs one day missed their cue, not showing up.  We relaxed, and enjoyed the following months that scrolled through May and June’s fragrant flowers, thick lawns cut weekly, releasing the unforgettable aromas of fresh cut grass.  Deep into summer the garden fluttered under the visiting companies of butterflies, mindful robins, cock-eyed, frenetic squirrels and later the incessant, raucous buzzing of the cicadas.

As September arrived, the sun warmed our home on its west side.  Stepping out to the deck to light the barbecue, I lifted the lid, and looking up, spotted, there, on the wall, a brown, marmorated, stinkbug!

Stinkbugs: seekers of nook and cranny.

“Cripes!  A stinkbug!” I groaned.   Looking beyond this unwelcome visitor I found another.  And another.   “Holy crap!  They’re back!”  Sure enough, as I walked along the side of our house I spied more than a dozen.

The next day, I obtained a particularly bug-lethal concoction from the hardware store. Mixing approximately 3 tablespoons to a quart of water, I filled up a handheld spray bottle.   The solution was 5 times as powerful as recommended.

A crusade of epic proportions

For the balance of September I sprayed every afternoon and every morning, targeting bugs in twos and threes, clustered under the soffit, ensconced in the cracks between the bricks, hiding under the lilac leaves, perched on the window screens, and skittering along the edges of the gutters.

It was a crusade of epic proportions.   I had gone through a whole quart of the concentrate, and went back for a second, relishing the daily harvest I was taking on these annoying little bugs. The walls dripped in poison spray as the bugs plummeted to the ground, dead.

You may recall the adventure story, “Leiningen And The Ants” .  A plantation owner and his crew are defending the crops from a vast plague of soldier ants that devour every living thing in their path as they march, six-legged, towards the house.  Leiningen first attempts to fend them off with a moat. The crafty, unstoppable ants still cross. Next he douses his fields in gasoline to burn the ants, but they forge on.  Finally, he floods the entire plantation by diverting the river, only just escaping his own vivisection as the ants pulled him down.

Somehow, I felt like Leiningen, defending house and home, and winning.

Early this October, the weather turned cold and wet, and the stinkbugs were gone.  They had vacated the trees, the walls, the gutters, the screens, and the soffit.  It was over.

October in Illinois is a flighty month, climate-wise.  After raking all the fallen leaves, we were presented with three days of 80’F weather.  This past week, I surveyed the yard, and looking up to our gutters spotted more of the bug.  Returning to the house, I loaded up another quart of the juice, and like trigger-hyper Terminator in a video game proceeded to decimate the bugs, which by this time numbered a small mob.

“I just finished off 84 stinkbugs!” reporting to my wife, who rolled her eyes.  “The sun brought them out, and they got the juice.” I was triumphant.   The sides of our ranch looked like a target range for paintball, with little wet splats everywhere.

After lunch, I ventured out to the deck as the sun came around.  “Geez!!  There’s more of ’em!”  I went back to search and destroy mode, and sprayed 135 more bugs.  “That’s gotta be it.  Just gotta be.”  Indeed, it did seem like their rush was finally kaput.

Our yard hosts a forest of mature trees.  Closest to the house is a Moraine Locust.  This tall giant provides the most generous and pleasing canopy during the summer months.  Swinging in our hammock one can gaze up at the millions of tiny leaves that sway effortlessly in the wind like  green petals against a brilliant blue sky.  It’s an irreplaceable retreat, passing the time, thoughtless and serene.

The summer idyl is over in October however, and that is when the leaves turn yellow, and all one billion of them fall to the ground, and to our roof, settling in golden billows packing the gutters.  It is a regular ritual to blast them out of the gutters, and with that purpose, I climbed to the roof, leaf blower in hand, and started the excavation.

A little tank at the bottom of the summit.

Hardly into the first side, and I scan the roof for errant leaves to push over the edge, when before me creeps a stinkbug.  Crabbing across the asphalt shingles, it joins another stinkbug.  I take a moment to blow it away with the leaves.  And then I look towards the peak of the roof, and there is a long train of bugs marching along the summit like Sir Edmund Hillary’s Everest trek, complete with sherpa porters, numbering in the hundreds.

Stepping up towards them I inspect the shingles at my feet, and watch as stinkbugs enter and exit every little groove in the overlapping sheets.  They are everywhere.  This is home.  Seekers of nooks and crannies, they have found refuge.  I walk up to the roof ventilators.  These are black, screened aluminum umbrellas which shelter vapor draft for the attic.  I tap on one, and 20 stinkbugs explode out from under in every direction like gangsters rousted from a crap game.

The neighborhood is a giant roof garden of marmorated chia pets.

I finish the leaf job, and descending to the deck pause to reflect.  Leiningen conquered the ants, but only after torching and flooding his land.  Not an option here.   It dawns on me, as I survey the gables and rooflines next door, that every house in town is hosting a giant blanket of stink bugs on their roofs like an enormous marmorated chia pet.  There is no defense.

We’re done for, until the frost comes, and it can’t come too soon.

Thanks for reading and sharing!  The Department of Agriculture sees these as an economic pest.  But a solution is hopefully underway.